We would like to introduce an innovative product for cooking with sunlight: the SUREST Sunlight cooker. 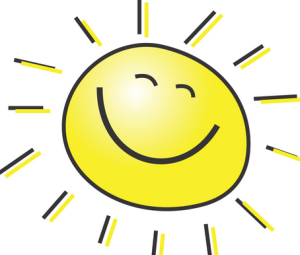 We all know that the sun is by far the largest available source of energy on earth. Already some 40 years we use this  inexhaustible energy source for the generation of electricity by means of solar panels and for the production of hot water by means of  a solar-powered hot water system. By using sunlight to cook with we want to provide a sustainable solution for the wordwide problem of cooking with wood.

In order to cook we need much more energy than e.g. for charging our cell phone or a LED lamp. That is why solar PV panels are not suitable (and way too expensive) to allow electric cooking. To collect sufficient energy for cooking purposes (circa 12.000 KJ), we concentrate the sunlight with a large Fresnel-lense. During daytime the lense will charge a heat storage tank with the heat of concentrated sunlight. When the tank is fully loaded, it can be dismounted from the loading station and than brought to the kitchen area. This means you can cook on the heat storage tank whereever and whenever you want!

“Poor people in developing countries often earn less than $ 2 per day, which should cover all their daily expensess. An average family will spend one third of their daily income on cooking  fuel … “

Most women in developing countries prefer to cook diner at night when it is dark. When using a conventional  solar cooker of the parabolic type  you have to stand besides it for hours in the blazing sunlight to continously stir the pot. Obviously, this device has not gained much appreciation and popularity  by the end users. In addition, their capacity is often small  and the cooking temperatures achived are not very high, which makes them unsuitable to cook a decent meal with. In order to cook meat or to fry something in oil a temperature of 180 degrees C is required.

On the other hand, these conventional solar cookers are suitable to make a pot of tea or to boil rice or pasta. Especially when used incombination with a “tea cozy” (or hay box cooker), in which a thick layer of  insulation material is wrapped around the hot pot to keep the heat inside for a long time to complete the cooking process. We highly recommend the use of hay boxes or any other slow-cooking device, as an addition to the use of our SUREST Sunlight Cooker, which will provide an energy-efficient integrated cooking solution. 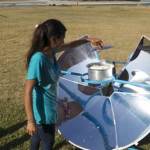 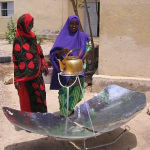 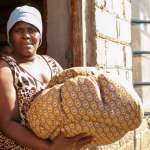 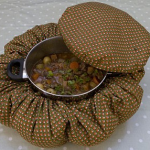